Being at BAFTA Guru Live 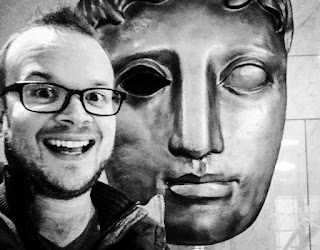 This weekend was the BAFTA Guru Live event, at BAFTA HQ in Piccadilly, London.  It's a bit like a mini festival featuring masterclasses, panels and keynotes by the leading names in Film, TV and Games.

A few months ago, I applied for a place with BAFTA Guru Pro. There were only 150 places, and it's for industry professionals with 6 months to 2 years experience working across film, TV and games. As there were so few spaces and it was for professionals across all three areas, I didn't hold much hope in getting a spot. However, a few weeks back, I got offered a place.

I was in a bit of a confusion about actually going, there wasn't a very big representation of Animation, or panels and masterclasses that were directly relevant to me, but the appeal was being able to network and meet people from the wider industry. I remember being offered a place on the Aardman Character course, and talking to my tutor Alex, about whether or not it was the right thing to do, and he simply said "take every opportunity that comes your way" (or words to that affect)... so with that in mind, I took the place.

It was a fascinating experience. As a BAFTA Guru Pro, we had access to exclusive talks and panels. We were also given one to one's with industry professionals. I had dedicated time with Grant Orchard, director and creator of Hey Duggee, and Becky Overton, who's a writer on Cbeebies shows such a Justin's House and Thomas and Friends. Both were able to offer insight and thoughts on where I can take my career over the next 5 years. Really useful stuff, and both delightful people.

My favourite talk, was the Film Keynote talk from director, Justin Kurzel. His thoughts on his favourite moments from his favourite films was really fascinating, for instance, in Jaws, he talked about the juxtaposition between the domestic nature of families on a beach, against the terror that lies in the water - although we never see the shark (in the film clip he shared with us), we still felt its presence. It highlighted for me the importance in every element of a picture, and how to structure a scene so everything plays a part in telling your story.

Other interesting panels were hearing from professional execs in My First Three Years in Television, and hearing commissioners and developers talk in Idea, Pitch, Commission. There were a few panels set up too for Guru Pros only (which was kinda cool being in such a small audience), my particular favourite was Delivering the Final Cut, with Film Editor Yan Miles, about his work on Sherlock. Also the Diary of a Series Producer was really interesting, although somewhat irrelevant to me as an Animator, it just affirmed that I never want to be a Series Producer!

It's a shame there weren't more talks directed specifically at animators, or professionals working in Kids TV, but I can't knock it. All in all, it was a great couple days. Of course, the free lunch and unlimited Nespressos helped ease the burden of being inside on a sunny bank holiday weekend, but hey, each time I clocked a BAFTA mask and realised the professionals I was meeting, I realised it was time well spent.

Email ThisBlogThis!Share to TwitterShare to FacebookShare to Pinterest
Labels: BAFTA